Melodies of enchanted flute came to caress my ears while outside was a pandemy. There was a bubble of beauty, bewitching in the middle of chaotic news.
I remember of this story that was read to me as a child, “the Pied Piper of Hamelin”: to rid the city of rats and avoid cholera, a Pied Piper lures them away from the city with his magical songs.
I was listening this music through the wall, and then, one day, we met.

Claudio Puntin welcomed us with the excitement of a child who wanted to show us all his toys. A clarinettist by profession, he loves to play and it shows ; on his face, mischievous, in the details of his studio that hide details: a ballerina is dancing in front of his mirror, he calls her Pina Turner (Mix of Pina Bausch and Tina Turner). 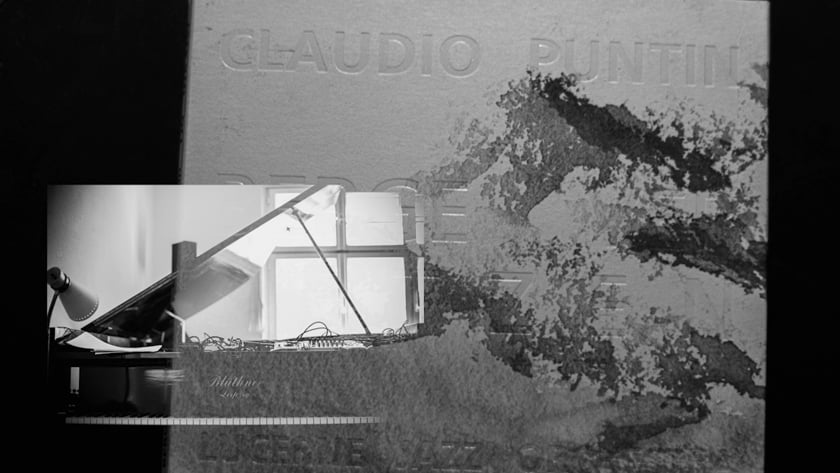 Everything here is used for the music.
After a quick tour of his studio, we discover his goldsmith activity (his initial training), which he now uses to repair his instruments.
He also creates custom-made crystal mouthpieces for brass instruments. This allows the sound to adapt to the musician’s mouth: a meticulous work.

Then, he makes us listen to his latest creations, with Dan Su, resident of the Gaswerk.
They perform here on August 15, in a performance called “Tu Be” in reference to the Gaswerk’s garden pipes.

Then he puts us on chairs at the Berlin Opera and propose to compose a track especially for “der interview”.
(You can discover this composition on the website).

Claudio grew up in Switzerland, of Italian origin, today he speaks 5 languages.
Together with his wife Gerður Gunnarsdóttir, violinist, they create the duo “essence of North” inspired by Icelandic music, where she comes from.
A country he particularly loves.
Open to the world, he travels a lot, in Europe, South America, Africa…

He now prefers experimentation and electronic music to classical or jazz repertoires. His thing now is more atmospheric and contemporary music.

For example, he collaborates with DJs such as Ricardo Villalobos, around “4 on the floor” rhythm, (disco beat at the base of electronic and techno music) and Max Loderbauer around modular music.

He also works with film directors, with whom the language is completely different: they don’t have the technical vocabulary to explain the music. He tells us about this collaboration with a Chinese film director, from the gay community of Honk Kong, with whom the cultural references were really far away, or this director, who asks him for “a music more blue“ .
He introduces us to Hildur Guðnadóttir, a childhood friend, who composed the Joker trailer and received an Oscar for her compositions.

Claudio has taught at the University of Berlin, and continues to give private lessons. The lock down has disrupted his tours, but he is still super active.
He has published on youtube a video series “Corona Music”.
He has just finished a new album called “Quantum”, which should be out soon.
This album was born from Claudio’s interest in quantum physics, when he discovered “The double slit experimentation”.
“Its all about attention“ he says.
“For example, a music is composed of several elements, one element is there, another one comes along. When is the point where our attention shifts to the other element? Can we pay attention to several elements? “

It is on these fascinating questions that we end our interview, with a big smile on our lips, and enriched by this conversation. We won’t miss the performance “Tu Be” which will take place on August 15/16 at 9pm during the Jazz festival, in front of house 28, where the sauna is located.

Claudio Puntin’s work can be found on his website: http://www.puntin.de/
and on social networks.

We're not around right now. But you can send us an email and we'll get back to you, asap.